Published on January 11, 2013 by wp_iphone2pc in iPhone WiFi Transfer 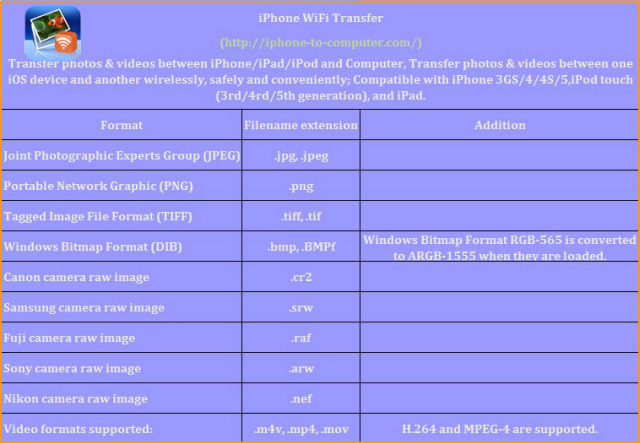 JPG/JEPG
The most common filename extensions for files employing JPEG compression are .jpg and .jpeg, though .jpe, .jfif and .jif are also used. It is also possible for JPEG data to be embedded in other file types – TIFF encoded files often embed a JPEG image as a thumbnail of the main image; and MP3 files can contain a JPEG of cover art, in the ID3v2 tag.

TIF/TIFF
Commonly used in image manipulation applications, page layout applications, scanners and other imaging devices, and for the archiving of images. It is suitable for high-color-depth images. TIFF is an acronym for Tagged Image File Format which supports multiple color resolutions, color encodings, color palettes, and compression methods, supports arbitrary bit depths of up to 16 bits per channel, and also 32 bits per channel and supports floating-point images with 32 and 64 bits per channel.

BMP/BMPF
BMPF is the Microsoft Windows bitmap format and is based on the internal data structures used by Windows to store bitmap data in memory. This format is used extensively by Microsoft Windows, and a variant of this format is used by the IBM OS/2 operating system. Because this format is supported directly by Windows, its use is very popular in that environment and has spread to other systems.BMPF is a very flexible image format in that it can store a wide variety of image data types, but it does not offer powerful compression. The only compression available is a run-length encoding variant that is supported only by certain content formats.

CR2
The CR2 file type is primarily associated with ‘Canon Digital Camera’ by Canon, Inc., and it is the raw image format for some Canon digital cameras. Raw images are basically the data as it comes directly from the CCD detector in the camera. Raw files can also contain text information about the picture and conditions in the camera when the picture was taken. These images are based on the TIFF image standard.

SRW
It is the digital photo taken by a Samsung digital camera, and contains a RAW image captured by the digital camera in a proprietary format; commonly touched up in photo editing software before publishing to the Web or to a digital media publication.

RAF
RAF is a digital image format used in Fuji digital cameras. Unlike JPEG or TIFF, RAF files cannot be printed or used by photo editors, because they have not passed any processing yet. In fact, RAF files play the same role as analogous negatives, i. e. they actually contain all the information necessary to make an image. This information is stored in the so called header file, and it includes sharpening level, contrast and saturation settings, color temperature, etc. RAF files also contain technical characteristics of the camera (metadata). Both image sensor data and metadata are saved to the card and are ready for further processing by photographers.

ARW
It is the digital photograph captured by a Sony digital camera, and based on the TIFF specification; contains raw, uncompressed image data as captured by the camera’s CCD; can be adjusted using image-editing software before exporting to common raster formats such as .jpg or tiff.
Different Sony camera models may store RAWs using the same “.arw” file extension, but with a different format. This is because the CCD on one camera model may differ from the CCD on another camera. Therefore, you should check the documentation of your photo editing software before assuming that it supports a specific camera model.

NEF
The NEF file type is primarily associated with ‘Nikon Digital SLR Camera’ by Nikon Inc.. It is the raw image format for some Nikon digital cameras. Raw images are basically the data as it comes directly from the CCD detector in the camera.

Compatible Video format: M4V, MPEG-4, MP4, MOV, etc.
M4V
M4V is a multimedia file format specifically designed for Apple products such as the iPhone, iTunes, iPod, and iPad. M4v is made for those digital products originally. Apparently, M4v has become more and more popular thanks to the increasing popularity of Apple products. So M4v is now supported by many new programs, players, and gadgets.

MPEG-4
MPEG-4 is a method of defining compression of audio and visual (AV) digital data. It was introduced in late 90s and designated a standard for a group of audio and video coding formats and related technology agreed upon by the ISO/IEC Moving Picture Experts Group (MPEG) . Usage of MPEG-4 includes compression of AV data for web (streaming media) and CD distribution, voice (telephone, videophone) and broadcast television applications of the created MPEG-4 files.

MP4
MPEG-4 Part 14 or simply MP4 is a multimedia container format standard specified as a part of MPEG-4. It is most commonly used to store digital video and digital audio streams, especially those defined by MPEG, but can also be used to store other data such as subtitles and still images. Like most modern container formats, MPEG-4 Part 14 allows streaming over the Internet. A separate hint track is used to include streaming information in the file. The only official filename extension for MPEG-4 Part 14 files is “.mp4”. The online community has benefited greatly because Mp4 has provided a faster loading, higher quality broadcast media for average internet users.

MOV
MOV is a file extension used by the QuickTime-wrapped files. The format was created by Apple Computer to work with multimedia files. Though MOV files are quite often found in the web, to play them on Windows computer one has to install an extra component or convert to other format. MOV is a container format and can contain video, animation, graphics, 3D and virtual reality (VR) content or text (for subtitles, for example).

All the above is a general conclusion. You can take it as a reference.

« How to Take a Screenshot with ...
Bluetooth on iPhone »